The brain expressed Melanocortin 4 receptor (MC4R) plays a critical role in regulating appetite and weight. Geneticvariants in MC4R represent the commonest monogenic form of severe obesity, being found in up to 6% of the GOOS cohort; over 300 MC4R variants have been identified by teams around the world to date (www.mc4r.org.uk).

In a study led by Jacek Mokrosinski and Sadaf Farooqi published in Cell Reports, Bas Brouwers and colleagues describe several molecular mechanisms that are critical for the function of MC4R. MC4R is a G protein-coupled receptor that signals by increasing levels of cAMP. Whilst the majority of obesity-associated MC4R variants impair cAMP signalling, approximately 20% do not and have been classified as “wild-type like” in previous studies.

In this paper, the team studied MC4R variants which did not impair cAMP signalling and show that these variants can impact receptor homodimerization, endocytosis and trafficking as well as the coupling of MC4R with Gαs protein and recruitment of β-arrestins 1 and 2. People whose MC4R mutations affect these different cellular mechanisms share the common phenotype of MC4R deficiency indicating that disruption of each of these mechanisms can exert physiologically relevant effects.

They also show that previously reported mutations in MC4R associated with protection against obesity (Cell 2019), cause an increase in receptor number by accelerating the recycling of MC4Rs to the cell surface or reducing its internalisation, mechanisms which cause a gain of function.

These findings pave the way for many more people with MC4R mutations to receive a diagnosis. Better understanding of how MC4R functions brings us a step closer to developing new therapies that can improve the quality of life of patients living with obesity.

The paper is published in Cell Reports.

I'm really looking forward to giving this talk and interacting with all of you! https://t.co/ZJBoePmjty

Stress doesn't cause people with eating disorders to lose self-control, leading to binge-eating, as was previously thought. New study from @maggieeastfire @PaulPcf22: https://t.co/Sw37Bxs8qB

Stress doesn't cause people with #eatingdisorders to lose self-control – leading to binge-eating – as was previously thought, say @maggieeastfire @PaulPcf22 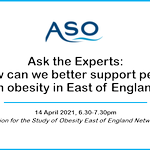